It was also a chance for the staff members from both organisations to meet and talk with their beneficiaries and to learn from each other.

The first contact we made face-to-face with our American counterparts was the dinner reception at the American Embassy near Hyde Park.  The evening was kindly hosted by the Defence Attaché Brigadier-General John Quintas and attended by other Embassy officials.

We began by mingling at the bar and meeting the people who we would spend the upcoming week with before we sat down to a lovely three-course meal.

The host of the evening - Brig General Quintas addressed the gathering and spoke of his regard for the upcoming cycle ride. Retired Lt Col Jerome Church, Blesma Chief Executive welcomed ‘our friends from across the pond’ and gave him his best for the epic ride ahead.

After a quick brief from the organisers about the six days ahead, it was off to our hotel near Heathrow airport to get our heads down before a 5am start on Sunday morning.

Sunday morning we left the hotel at 0530hrs to get to Windsor Castle around 0630hrs.

On a beautiful autumn morning, the wounded riders were met and congratulated by Her Royal Highness Princess Beatrice of York. As they set off down the ‘Long Walk’, they were accompanied by the Mounted Cavalry from the Honourable Artillery Company. 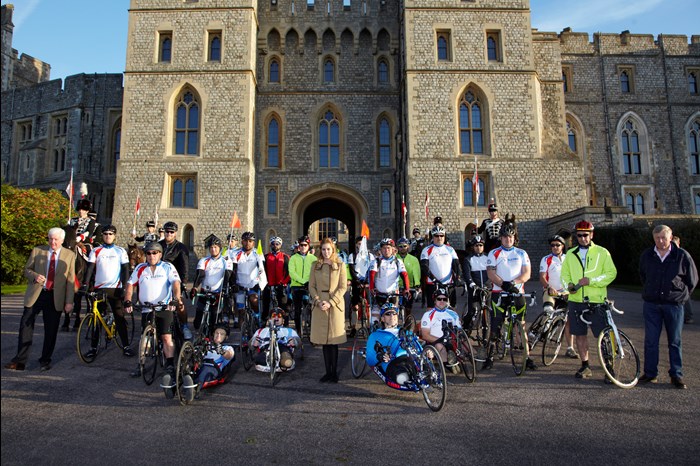 The first stop was at the Royal Military Academy Sandhurst, where all officers in the British Army (Regular and Reserve) go to train and get their commission. The riders were accompanied by some of the families based there on their rider around the grounds, including in front of the iconic Old College, where Officer Cadets pass off at the end of their course. Mayor Paddy Blagden of Farnham, a former Brigadier in the Royal Engineers, was there to meet the riders as they arrived at the front of Old College. Mayor Blagden has chosen Blesma as his charity of choice for his Mayoral term, so it was an excellent opportunity for him to meet the people who benefit from his fundraising, and for them to meet a prolific fundraiser. 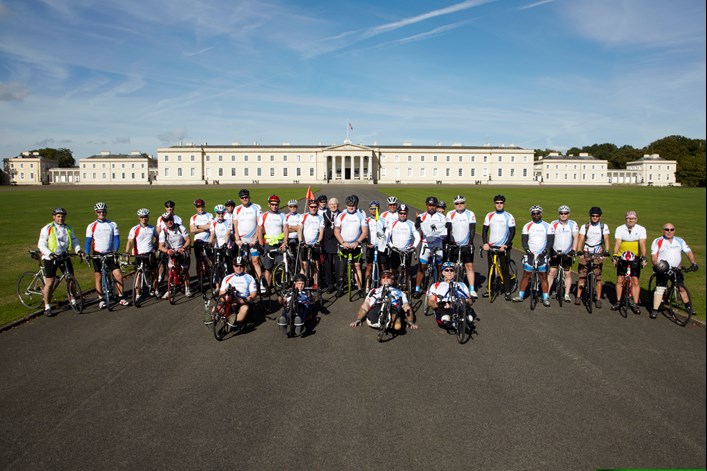 Starting in Petersfield, Day 2 proved quite tough for all riders but especially for those on hand-bikes as they took on steep hills and winding country lanes. Proving that Blesma is all about shared fellowship and camaraderie, riders on bikes got off to help push those on hand-bikes. This pretty much summed up what the event set out to achieve: team work amongst injured veterans to complete a demanding challenge.

Arundel Castle was a fantastic place to finish. The clear skies and warm weather made the Castle an even more remarkable sight. Our American counterparts were impressed by the antiquity and grandeur of the Castle and its surroundings. The riders were treated to a free tour by Castle staff. 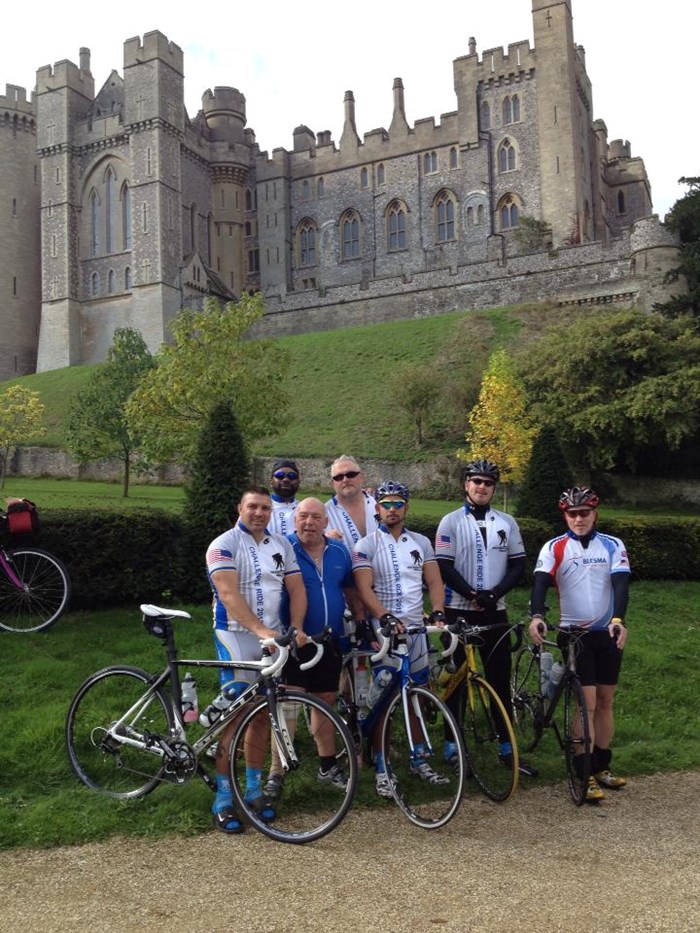 Battle Abbey School was a key highlight of the trip. Riders were received by staff and pupils and welcomed into the school to have tea and cakes, served by the pupils themselves. The riders thoroughly enjoyed chatting with the pupils and entertaining any questions they might have had.

“All of your folks were so friendly, upbeat and gracious. I had arranged for some of our sixth form students to serve tea and host the event. So many of them came to see me afterwards with comments such as "Thank you so much - I feel really privileged to have met those guys" and "I feel really humbled by who they are and what they've done.” 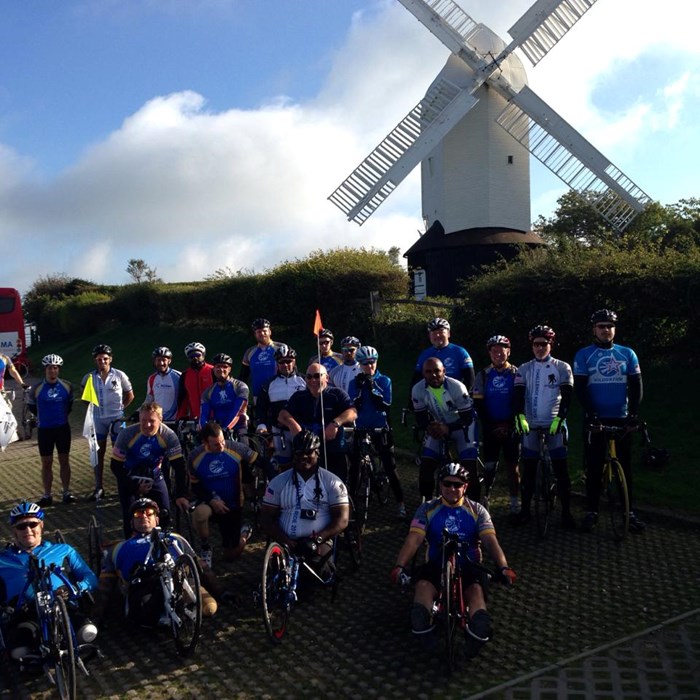 The riders witnessed more stunning views of the south coast of England as they prepared their bikes for day 4 of the ride. Now over half way through, the riders knew what was expected of them and continued to put in all their effort – including helping each other through the toughest climbs.

Penshurst Place proved to be a rewarding finishing point, with cadets and instructors from Kent Army Cadet Force turning up to meet and greet the riders, and present them with a cheque for money they had raised. Viscount De L’Isle, owner of the estate and the Lord Lieutenant of Kent, had also planned to be there to greet the riders, but unfortunately was called away at the last minute. Ben Thomas, the General Manager of the estate, kindly stepped up in his place. The riders were treated to hot soup and rolls and free access to see the house and gardens for a year.

Thursday was a simple continuation of hard work and bags of effort all round. The cyclists started off at High Rocks, near a steam engine railway station. If they weren’t awake already, they definitely were once a tree fell right next to the starting point, thankfully not hitting anything or anyone on its way down!

Once they had finished for the day and the bikes were all packed up, the riders returned to base near Heathrow airport for some well-earned rest and to recuperate before the big finale the next day.

The final day proved to be the most testing. The weather had finally closed in after threatening to do so for days. This made the descent down Box Hill quite precarious.

Francie Clarkson, Manager and wife of Jeremy Clarkson (presenter of BBC's Top Gear), was on hand to give the riders support during the day, joining in with the cycling.

Unfortunately, the morning rush-hour traffic and a few scrapes meant the morning’s ride was called off before the finish point. However, it was not all bad news as we were welcomed into a Community Centre at Leatherhead where we were all treated to tea and biscuits by the locals.

After being fed and watered, the riders and staff then travelled by coach to what promised to be a real morale booster – the Top Gear test track at Dunsfold Aerodrome. And oh boy did it deliver! Riders were given a guided lap of the test track, and then set loose to try to get their best power lap! The cyclists – American and British alike, were filled with a sense of exhilaration as a helicopter hovered above and posed for a photo. 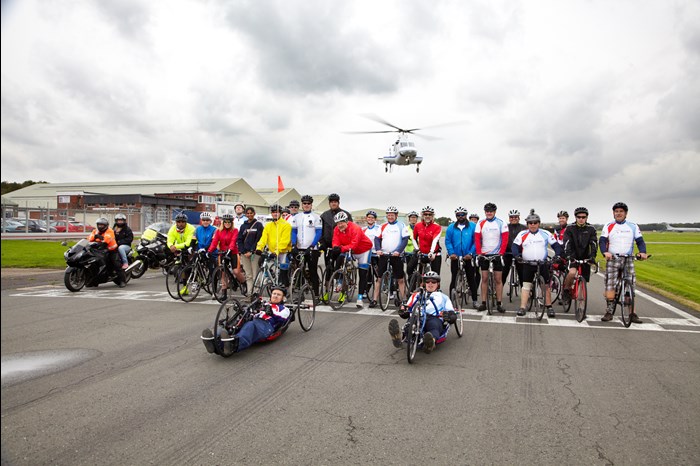 For the finale, the riders made their way into central London by coach to greet soldiers from F Company Scots Guards and the (now former) Minister for Defence Personnel, Welfare and Veterans Mark Francois MP who had turned out to meet the wounded comrades. He spoke of his deepest appreciation at the feat the cyclists had just achieved 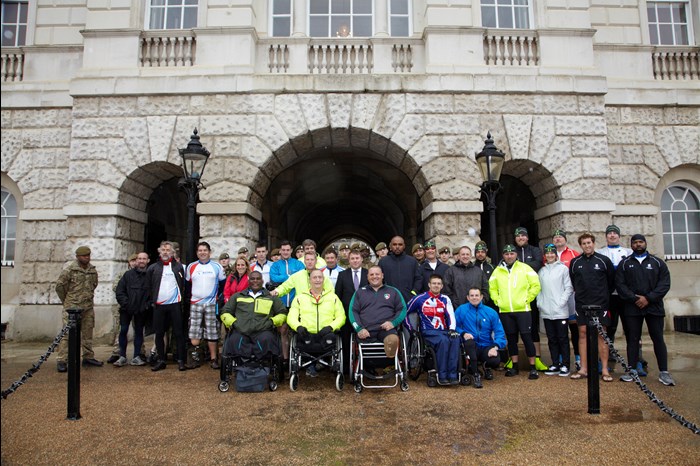 The evening was spent having some dinner and a few well-earned drinks altogether at Twickenham Stoop rugby stadium, home to rugby Premiership team Harlequins before people parted the next morning. A few words were said by each person on their experience of the week, leaving everyone with a feeling of satisfaction at having achieved something with a great group of people.

The six days of SR UK were an eye opener for both riders and staff. To the staff, it was a demonstration of what they work towards: the well-being of injured veterans. To the riders, it was an opportunity to mix with like-minded people from home and abroad and come together to aid their own recovery, and others’. Many lessons and ideas for the future were taken on board so that next year can build on what was achieved this year. There is no doubt though that everyone present had an amazing time, with amazing people.

Join fellow Members and supporters to exchange information, advice and tips. Before commenting please read our terms of use for commenting on articles.