The final report kindly sent into us by the OLR Team!

About two years ago an idiot called Mike Crawley suggested that as a ‘retirement wheez’ he would like to run round Britain!  He thought Mike Inkster might be daft enough to join him as he was not one to turn down a challenge, so the concept of Operation Long Run was born.

Both Mikes have long backgrounds in ultra-endurance undertakings of one sort or another so after some initial investigation and discussion they formulated a plan. They would attempt to get round Britain, on foot, in 50 days. The total distance will be 3000 miles which means that between them they have to cover 60 miles every 24 hours for the duration of the challenge. Not a bad adventure for two 66 year olds!  In addition, they would try and raise money for a worthwhile cause and to that end chose Blesma as they both have military backgrounds and believe strongly in the work that Blesma does. 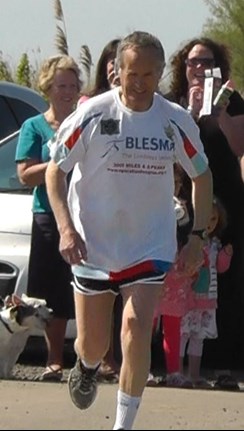 However, as things progressed it became fairly obvious that the commercial funding required to make the plan a reality was not going to be forthcoming so they changed the plan to a run round the South Of England to cut down on the costs and logistics but still sticking to the 3000 miles in 50 days idea.

About a month before the ‘off’ Mike Inkster got the news that he needed some urgent surgery and had therefore to pull out of the physical side of the run. Mike Crawley decided at that point that he would carry on his own and would cover 3275 miles in 100 days around a course in the Kent Marshes near Herne Bay. Mike Inkster would become the administrator/odd job person.

It was at about this point that Mike Crawley decided that the initial task was not quite enough and decided to tack the Three Peaks Challenge onto the end of the run as a sort of victory lap. This involves climbing the three highest mountains in Britain (Ben Nevis, Snowdon and Scafell Pike) in one go: that is, going straight from one to the next with only the driving time in between.

Mike set off at 10.00 hours on Sunday 5th May 2013 and for the next 100 days covered an average of 32.75 miles on foot on every one of them. He went through all the weather changes imaginable from torrential rain and fierce winds to blisteringly hot dry conditions but he never gave in. Doubtless there were days when he questioned the sanity of the undertaking but surprisingly his body held up remarkably well; his only major concern being an ankle injury sustained at about day 80 which he ‘ran off’ in a couple of days. He never got a blister!

From the very start of the project Mike had offered his body as a guinea pig to the research team at Coventry University to use for looking into the effects of long, continuous exercise on an ‘older’ person and the dietary strategy required to keep up that level of exertion over such a long period. The Team were wonderful and thanks to their advice and input Mike survived the ordeal. However, on his final testing after the Three Peaks it was found that his body weight had remained relatively stable but his fat levels had dropped significantly. He had become something of a ‘racing snake’.

It is a testament to his 100 days of continually training that three weeks before his 67th birthday he was able to run up the highest mountain in Britain in 2 hours and 12 minutes. Having been there (some way behind) it was great to see the looks on the faces of the folks he was whizzing past on both the way up and the way down.

Mike Crawley completed 3335.8 miles, on foot, in 100 consecutive days of running and walking on Monday 12th August 2013……that’s 33.358 miles every day. He then completed the Three Peaks Challenge two days later climbing Snowdon (Wales), Ben Nevis (Scotland) and Scafell Pike (England) over a 48 hour period. In the process he has raised much needed funds for Blesma and shown what can be achieved with determination and resolve.

If you would like to make a donation you can do so by going to: http://uk.virginmoneygiving.com/OLR. Thank you in advance for your generosity which will be much appreciated.

He would like to thank all those who have already made contributions and supported his efforts throughout.

Join fellow Members and supporters to exchange information, advice and tips. Before commenting please read our terms of use for commenting on articles.