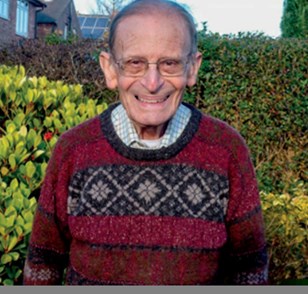 Braham Myers, 94, was injured while serving as a gunner in WWII. Later, he became chairman of  the Leeds Branch and played a key role on the Association’s National Executive. He was awarded an MBE in 1985, mainly for his work for the Association.

“I served as a gunner between 1941 and 1945, and was 24 when I was injured,” he remembers. “I was serving in North West Europe, on the Dutch-German border. I was reconnoitring a gun position when, like many during the war, I stood on an anti-personnel mine. I lost the lower part of my right leg and was flown back to England. I spent a long time in hospital, eventually ending up in Chapel Allerton in Leeds, not too far from my parents’ home in Harrogate.”

With so many war wounded, rehabilitation after WWII was a slow process and improvisation often became necessary. “Recovery was quite extraordinary in those days,” says Braham. “It took a long time to get a prosthesis. I was on crutches for a while and found that very frustrating. Eventually, I went to the Limb Centre and my surgeon, who was in fact an eye surgeon, made me a peg leg out of plaster and steel. It worked, but one day when I was in London it came to pieces at the top of some stairs. I hopped down the stairs and had it repaired at Roehampton, but on the way back to my digs it collapsed once again when I was changing buses.”

I was 24 when I was injured. I stood on a anti-personnel mine. I lost the lower part of my right leg and was flown back to England

Braham was forced to return to Harrogate, where a letter awaited him telling him his prosthesis was finally ready. “Losing a leg never held me back,” he says. “I worked for the Ministry of Education, then completed a history degree on a Cambridge University scholarship. Eventually, I joined the family business, Headwear Manufacturers, where I spent the rest of my career. I retired fully in 1986.”

Braham discovered Blesma while rehabilitating on his hospital ward. “There was a WWI veteran called Wilf Wolfson who would come around the beds, give us sweets and cigarettes, and recruit amputees,” he remembers. “Apparently, he recruited nearly 1,000 men, and I was one of them. I didn’t do much with Blesma at first, but in the 1950s I went to a Leeds Branch meeting thinking it was time I got involved.”

“My first local role was as Employment Secretary, not the onerous role it was after WWI when Blesma played a huge part in getting amputees back into work. However, I did find some people jobs.

Braham is full of praise for the work Blesma does. His happiest memories are of the golden anniversary events that took place in 1982. “It began with a large conference with delegates from all over the British Isles and overseas. We had a parade along Whitehall and a service in Westminster Abbey, as well as many local events. Even Margaret Thatcher attended the function in the Guildhall in the City of London in spite of the beginning of the Falklands Conflict.”

And Braham sees the charity as being relevant despite the changing landscape. “The Association has changed both in terms of the way it is run and the make-up of the membership. Many Members have far more severe injuries than ever before – people just wouldn’t have survived such incidents in earlier conflicts – and the charity plays a vital role for them. May it continue to thrive as long as the need remains.”